How to enable DALI groups

The Openmotics system supports the use of DALI groups. These groups must first be configured using the Lunatone Cockpit software followed by programming some bytes in the eeprom of the Gateway. Maximum 16 DALI groups (0 to 15) can be used for the whole system.

The Lunatone Cockpit software allows you to configure the different DALI ID’s into certain groups. Just connect Connector A to your RS232-USB convertor and start the Cockpit software. Go to the configured DALI ID’s where you can select to which group it should belong. 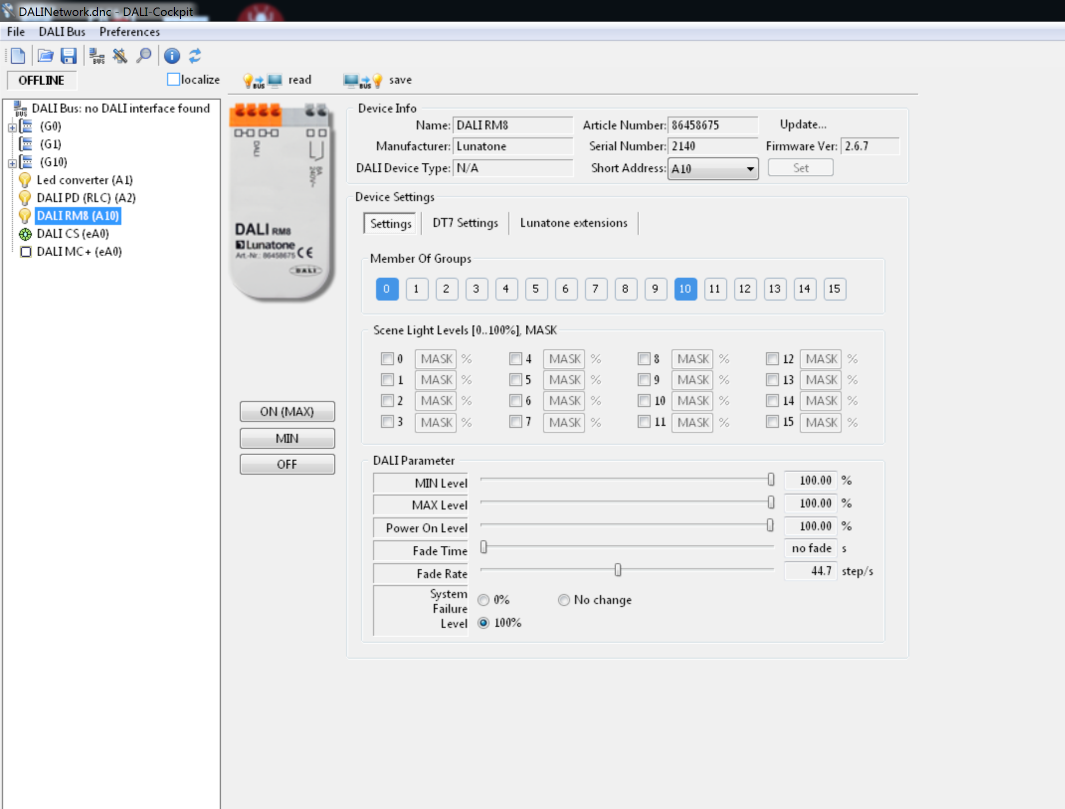 Once the programming is done, reconnect Connector A and B so the DALI Network is again coupled to the CAN Control.

Programming the DALI groups in the Gateway

It's possible to switch ON, OFF and DIM light groups. A light group is a series of lights that will change state at the same time. In total, 32 light groups can be created with a maximum of 64 lights per group. These lights can be normal outputs (dimmed and non-dimmed), switched outputs but also DALI groups can be used. For more information about groups, please see Light Groups.

This section describes the use of DALI groups.

With the Lunatone Cockpit software, as described above, you can create DALI groups. When a Light Group is activated (By using Basic Action 73 or 74 for example or by coupling with virtual outputs as described in Light Groups), automatically, the same DALI group number is actived on all connected CAN Controls so the appropriate DALI Group instruction will be sent as well.

Since the light groups are programmed directly in the eeprom of the DALI devices itself (by using the Lunatone Cockpit software), the Openmotics system doesn't know which devices are part of each DALI group that is used and thus will not know the state of these devices. 2 possibilities:

For more information, see the Dali Group section in the Memory Model pages 104-111.